The BRICS New Development Bank is to be launched before the July Summit in Ufa, said Russian Finance Minister Anton Siluanov after the BRICS Finance Ministers and Central Bank Governors Meeting, which took place on 16 April 2015 in Washington, DC.

The Russian Finance Minister said the meeting addressed the issue of creating a legal framework for the Bank's operation. The decision was made that in the foreseeable future, all the BRICS countries will follow Russia in ratifying a corresponding agreement and determine the leadership of the new body, in particular the president and vice-president. Mr Siluanov said he will become the Chair of the Board of Governors of the BRICS New Development Bank.

The meeting also discussed the progress of the BRICS Contingent Reserve Arrangement.

In analysing the situation in the global economy, the participants in the meeting agreed that its growth is unstable. "The growth is rather flimsy and is based primarily on growth in the United States and the UK," Mr Siluanov said. According to him, developed economies today are growing at higher rates than previously, while developing economies, on the contrary, have stabilised somewhat. 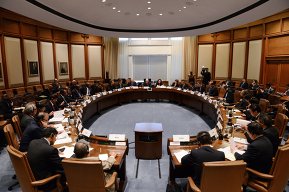