A large-scale event to establish a BRICS Network University has been planned for September, and in October, a BRICS Global University Summit will take place in Moscow, hosted by the Moscow State Institute of International Relations (MGIMO) and partner universities, said Russian Deputy Minister of Education and Science Alexander Klimov, speaking at the International Conference "Education and global cities", in St.Petersburg.

The conference also discussed the concept of the future university. According to Mr Klimov, the joint efforts and discussions should result in the creation of a document.

"Over the course of the next month and a half we should agree on the fundamental structure of BRICS University so that in September, the BRICS Network University, endorsed by all members of the association, will be officially established," Mr Klimov said.

He also said the Meeting of the BRICS Working Group on Education has been set for 25-26 June, and that in November, a meeting of senior officials and education ministers will take place in Moscow. 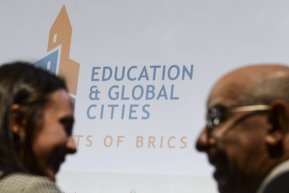