On 8 October 2015, the first BRICS Ministerial migration meeting and the Round table on "New strategies of managing migration as the key to a successful development of society", took place in Sochi.

The event addressed the regulation of migration processes, which are gaining strategic importance in light of the ongoing events in the Middle East.

The Russian delegation was led by Konstantin Romodanovsky, Head of the Russian Federal Migration Service. The events were attended by Kiren Rijiju, Minister of State for Home Affairs of India; Zheng Baigang, Head of the Exit and Entry Administration at the Ministry of Public Security of China; Malusi Gigaba, Minister of Home Affairs of South Africa; Sergei Lebedev, Chairman of the Executive Committee and Executive Secretary of the CIS; and high- ranking representatives from the Eurasian Economic Union, the Shanghai Cooperation Organisation, the migration agencies of the CIS member states, the International Organisation for Migration, the relevant UN agencies and the Organisation for Security and Cooperation in Europe.
Speaking at the meeting, Mr Romodanovsky said there are no ready-made migration policy recipes for all countries, but Russia's experience with the massive acceptance of migrants could be useful for the international community. Russia's migration policy is based on the priority of the legitimate rights of migrants and compliance with its international obligations.
"We provide a comfortable environment for in-demand, legal migrants," he said.
Russia pays special attention to the employment of qualified specialists. Over 115,000 work permits have been issued to foreign nationals; favourable conditions have been created for granting Russian citizenship to students, entrepreneurs and investors, and there is close interaction with diasporas and religious organisations that have influence among representatives from a particular country.

"The most important aspect of accepting such a significant number of migrants is organisation, adaptation and integration. We act on the premise that migrants should be fluent in the language of the host country and know the fundamentals of its laws, history and culture," he said.

During the meeting, representatives from migration services of the BRICS countries, the Eurasian Economic Union, partners of the Shanghai Cooperation Organisation, the relevant UN agencies and the Organisation for Security and Cooperation in Europe participated in a roundtable, "New strategies of managing migration as the key to a successful development of society."

At the end of the BRICS-format meeting, the heads of the association's migration services adopted a joint statement on stepping up cooperation in the migration sphere along the following lines: interaction in the information sphere, countering illegal migration and international protection.

"I'm sure that the sharing of experience and the exchange of best practices that took place in Sochi will help us formulate common effective and realistic approaches in migration policy," Mr Romodanovsky said at the end of the meeting. 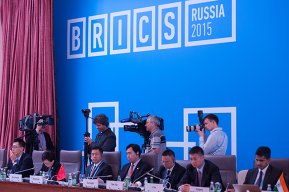