On 9 October 2015, the Fifth Meeting of the BRICS Agriculture and Agrarian Development Ministers took place as part of the 17th Golden Autumn Russian agricultural exhibition.

The ministers discussed cooperation in providing food for the most vulnerable groups of the population, reducing the negative impact of climate change on food security and adapting agriculture to climate change.

An integrated stand was arranged at the Golden Autumn exhibition featuring investment projects and the agribusiness capabilities of the BRICS countries.

The ministers, in particular, discussed the initiative to create an integrated agricultural base that was put forward by Chinese representatives, Russian Agriculture Minister Alexander Tkachyov said.

"Russia has endorsed this proposal and believes that its implementation will help improve the quality of forecasting and the promptness of responses to abrupt changes in the situation on agricultural markets," he said, adding that the project will also lay the groundwork for effective solutions to ensure sufficient supplies of good quality food to the population.

"Cooperation among our countries in creating a BRICS agriculture information base can make an important contribution to the international efforts to ensure global food security," the minister said.

The level of interaction among the BRICS member countries is growing each year, he said. Last year, a mechanism of consultations among BRICS permanent representatives was established at the UN Food and Agriculture Organisation.

"I'm sure that this mechanism will play a coordinating role and provide an impetus to our cooperation in agriculture and food security on a practical level," he said.

The BRICS countries have a huge resource base, human potential, rich mineral reserves and a vast internal market, he said. The member states are faced with similar tasks in agriculture and agribusiness development and in improving the living standards of the people. All of this opens broad opportunities for mutual cooperation, the minister said. 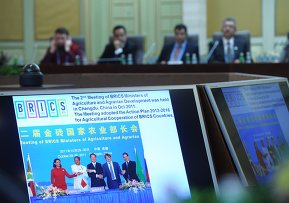 Meeting of the BRICS Agriculture and Agrarian Development Ministers