On 25-26 January, The Meeting of the BRICS Ministers of Labour and Employment took place in Ufa. The meeting produced a signed declaration which stressed as priority the need to formalise the labour market of the BRICS countries.

"Informality constrains our productivity, potential economic growth and efforts to improve the well-being of our people. Strategies to facilitate the transition to formality could include incentivising employers and supporting workers who seek employment in the formal economy and strengthening labour inspection and enforcement," the document states.

According to the declaration, the meeting participants decided to focus political measures on improving the quality and inclusiveness of employment by upgrading enterprises, developing professional standards and qualifications, introducing higher quality in professional education, providing social security to all workers, and supporting the unemployed.

The ministers made a commitment to compare their labour market indicators and work together with statistical services of the BRICS countries that collect and publicise data. This will allow statisticians to track and publish the progress made in the employment programme.

The participants agreed to share information on labour and employment issues, job creation, their transition from an informal to a formal economy, economic performance and on the employment of young people and women, as well as on other issues.

The participants also approved Russia's initiative to develop an information resource dedicated to social and labour issues within the BRICS countries. The website will focus on human resource development, including the introduction of modern efficient requirements for workers' qualifications and skills.

The next meeting on employment issues will take place in India. 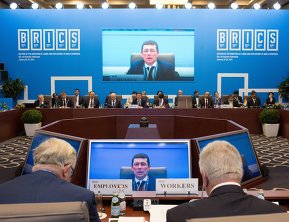 The Meeting of the BRICS Ministers of Labour and Employment 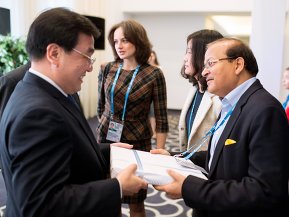 The Meeting of the BRICS Ministers of Labour and Employment. Day Two