The first steps of the New Development Bank (NDB) established by BRICS countries will be aimed at promoting infrastructure development in its founding member-states, Russia's Minister of Finance Anton Siluanov said at a press briefing in Ufa.

Although the bank could start helping other countries overcome budgetary problems in the future, for now it will only serve as a development institution.

"Even if the bank starts paying attention to adjustment loans, it won't happen right away. The bank needs time to find its bearings and start fulfilling its main function," Mr Siluanov said.

He added that the NDB could consider becoming involved with Russian regions, including Crimea, adding that decisions to provide funding for projects will be based on their efficiency. Specifically, Russia will offer the bank and major investors to take part in building the Moscow-Kazan high-speed railway, Mr Siluanov said. The project cost should be evaluated first, he said.

"If we offer projects to new development banks, I think they will be interested in profitable large-scale infrastructure projects with a solid return on investment," the minister said.

According to the minister, the rapid growth of the Chinese economy in recent years could not last forever. "This market segment has become slightly overheated, leading to the 30-percent decline on the Chinese financial market that we are currently witnessing. Of course, this couldn't but affect the global financial system. Raw materials are under pressure, as China is a major consumer," Mr Siluanov noted, adding that he still hopes that the Chinese financial authorities will be able to get the situation under control. He also ruled out any serious repercussions on the Russian market. 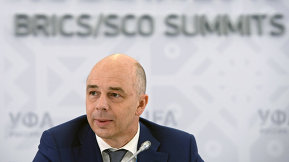 Briefing by Anton Siluanov, Russia’s Minister of Finance, Chairman of the Board of Governors of the BRICS New Development Bank