The first Meeting of the BRICS Heads of Industrial Authorities took place on 20 October in Moscow. The event was also attended by industry ministers from the member countries of the Eurasian Economic Community and officials from the United Nations Industrial Development Organisation (UNIDO).

"We have the requisite array of tools to build up our cooperation in all sectors of industry and to implement practical tasks arising from the BRICS economic partnership strategy. We should take advantage of these opportunities to the maximum extent possible," Russian Industry and Trade Minister Denis Manturov said in his welcoming remarks to the participants.

The New Development Bank (NDB), established by the BRICS countries, will also be instrumental in securing mutual investment in joint projects in a broad range of industrial sectors, he said, adding that a competitive selection of priority industrial projects for funding in 2016 has already begun.

According to Mr Manturov, Russia has developed a roadmap for trade, economic and investment cooperation with the BRICS countries through 2020. The document includes projects in the manufacturing and mining industries, machine-building and power engineering, among other sectors.

"We are ready to work them out with you and identify a scope of initiatives that will be jointly implemented with NDB assistance and national support mechanisms," Mr Manturov said.

He also put forward an initiative to develop cooperation between BRICS national research centres and think tanks, which should significantly reduce the cost and timeframe of conducting research, while their results could be utilised in joint innovative projects.

He also proposed expanding the scope of cooperation in the scientific and technical sphere by utilising the opportunities of international organisations, such as UNIDO, more actively.

"A key element here will be the creation of a consolidated industrial and technological BRICS-UNIDO platform, which will ensure advanced industrial technology exchanges between our countries," he said.

There is also good potential for joint research opportunities under the Eureka European research programme, which includes the BRICS states, among others. This will help identify promising technological areas in various industrial sectors.

In conclusion, the minister proposed setting up economic coordination between the BRICS countries and the Eurasian Economic Union by lowering trade barriers. He believes this will help invigorate mutual trade turnover, increase the volume of investment and bring about new comprehensive industrial projects. 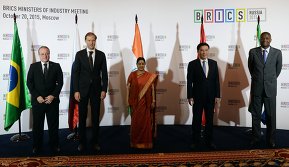 Meeting of the BRICS Heads of Industrial Authorities